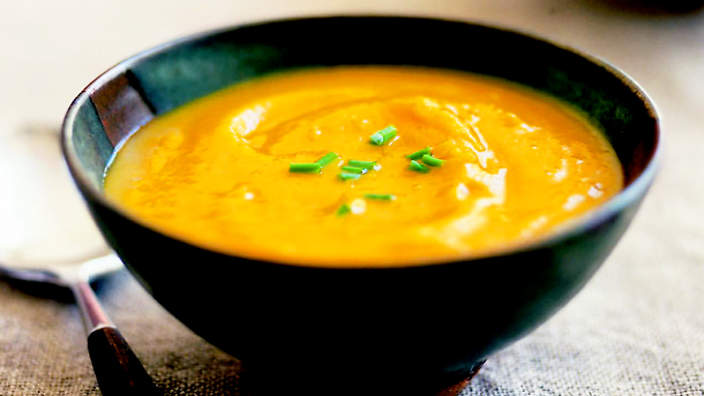 in Cooking, Get Healthy

Let’s talk pumpkin, shall we?  This fall favorite packs a significant source of vitamin A and is high in fiber.  A serving of pumpkin contains over 3 grams of iron, which keeps our immune systems running properly and helps us stay cold-free.  Furthermore, the nutrients that give the vegetable it’s beautiful orange hue have been suggested to protect us from developing lung cancer, prevent heart disease, and reduce inflammation.  Pumpkin packs a punch!

With temperatures dropping, I thought what better way to incorporate more pumpkin into my diet than with a delicious and nutritious pumpkin soup!  Now I used a crockpot, but the recipe can be made just the same in a stovetop pan under medium-low heat!

Hope you enjoy this recipe, I know your body will!

1. Heat the oven to 350 degrees.  Cut the pumpkins in half lengthwise, scoop out the seeds and move them to a separate bowl.  Place the pumpkin halves face up on a cooking sheet and brush evenly with olive oil.  Sprinkle evenly with garlic powder, pepper and a dash of sea salt. Roast for 1 hour, or until the middle is soft and easily falls away from the skin.

2. In a frying pan over medium heat add 2 tsp olive oil, apple, onion, garlic cloves and carrots.  Stir occasionally for 12 minutes, or until onions are browned.

3. When the pumpkin is fully cooked, remove from oven.  Use a spoon to scoop out all of the inside, only leaving the outer shell, and transfer to a bowl. Beat until smooth.

4.  Transfer pumpkin to the crockpot and turn to low heat.  Add apple cider, and contents of frying pan to pumpkin and stir thoroughly.  Mix in greek yogurt, ground pepper, and sage.

5.  Let the contents sit in the crockpot with the lid on for no less than an hour before serving.  If preparing on a stovetop, leave on low heat covered for 20 minutes.  Stir frequently to avoid sticking.

6. Serve with a sprinkle of cinnamon if you’d like, or one pretty sage leave atop a dollop of greek yogurt!

Clean off your pumpkin seeds and transfer to a pot of boiling water with 1 tsp sea salt.  Let simmer for 10 minutes.

Remove from heat, drain and dry off seeds between two paper towels.

When dry, transfer seeds to a bowl with 1 tsp olive oil and the spices of your choice!! I like either garlic, cayenne and pepper OR cinnamon and a bit of brown sugar, but anything you’ve got will work!  Coat the seeds in the spice and oil mixture and spread them evenly on a baking sheet.

Bake at 325 degrees for 10 minutes, or until shell is crunchy!

The 5 Tinctures I take for Optimal Health (+ Beauty!)