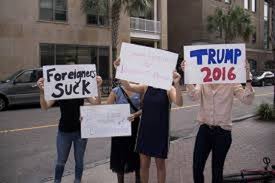 I hope you accept this letter as a formal apology for my fellow Americans, they know not the repercussions of their support of Donald Trump.

The allegiance to a tyrannical, sexist, racist, egotistical media-whore like Trump can be summed up in two words: ignorance and fear.

You see, while America boasts itself as a land of educational opportunity, it is not necessarily the case.  Sure, we are home to arguably the best ivy league institutions, but only a negligible minority of our youth will ever grace their pearly halls… and in more cases than not, they are the ones bred for it with semesters in the Swiss Alps and Chinese tutors.

The real story of America is riddled with poverty and poor educational systems. Children aren’t encouraged to learn another language or delve into the arts.  There is no rigorous study into differing cultures or religions.  In fact, our history books are almost comical how skewed they are to boast American idealism.  Columbus should definitely be a celebrated hero who never raped, pillaged and murdered the people he ‘discovered’ (Vikings who?). Sure, we invited the ‘Indians’ to turkey dinner and they gave us some land and corn. Yepp, when the north won the Civil War, racism dissipated, just like that. Plus ‘African Americans’ were never really treated that badly anyways.  Should I continue?

By the way, that is only what our kids learn in school.  The lessons they are taught in religion and at home can often be worse.  I won’t delve into much detail…. but you can imagine what growing up in a homogenous American town is like, can’t you?

Let me draw some distinctions.   In France, per se, your parents hopped you over a border frequently to experience other cultures.  You developed a palate for the finer arts, an appreciation for literature and history and a more globalized view of the world.   Your newspapers weren’t heavily censored, and perhaps your parents engaged in political debates with you over dinner instead of zoning out to the Price is Right on tv. Sure, I’m making unfair generalizations, but there’s a bit of reality when I say you were most likely better educated & more cultured by 14 than most adult Americans will ever be.  But it’s not just France. While traveling in Southeast Asia, I was shocked at how informed the population was on world news, how well they spoke English, how many different cultures they understood on a deeper level.

In America, the majority of children are not afforded the opportunity to travel.  They are not given the chance to be inspired by art or culture.  The ‘community’ outside their home is strictly homogenous and affords no platform to diversify.  The rest of the world feels light years away… and there is no thirst to explore it.  Why would there be?  All of their favorite shows and movies take place in the US.  And that is their favorite pastime anyways… watching tv.  This horrible disconnect exists between Americans and the rest of the world.  This disregard for our planet and a lack of empathy for other races and religions.  Maybe it’s the ocean that divides us, but there is a blatant disinterest in world politics, and even world happenings in general.  I too am guilty of this, but frankly, I was just never raised to give a shit. My family was proud to be American and felt lucky they were able to raise me in a safe and prosperous country.  …There was never any concern with the rest of the world, it didn’t affect us in our American bubble.  Thinking back, it is almost as if we are born with an ignorance handicap in America.  One I’ve been struggling to overcome since I first really travelled.  Not to the Caribbean where I sat in an americanized hotel and gorged on all inclusive buffets.  But when I really travelled.  Touched my feet in foreign soil, learned another language, immersed myself in a culture. But even still, I find my ignorance hinders me from time to time. As does my fear.

Fear.  Fear of terrorism.  Fear of economic uncertainty. Fear of God, fear of change, fear of diversity, fear of anything not “American”.  Americans are so accustomed to using the “proud to be an American” slogan as a badge of racism.  We are better.  I am better.  According to the religion and history that America was founded on, the white man is on the very top of the pyramid.  Why wouldn’t they hold on as tightly as they can to their ‘God given’ power?  A power they didn’t have to work for?  Successful women and minorities threaten their status quo, and it scares them.  It instills deep rooted fear. White women who don’t threaten it?  Well they fit beautifully right below the white man on this pyramid.

Ever since our American bubble burst at 9/11, we have been living in fear. The economic crisis deepened this insecurity.  For many, the legalization of gay marriage exasperated it. The election of a black president, the marathon bombing in Boston, the influx of Mexicans across the border.  All of this change?  It rattles people away from the monotony of their lives. Of their individual bubbles. They yearn for America to go back to ‘the good old days’ before we were this globalized world where crisis like Syrian refugees actually impacted us.  We don’t care about global news, remember?!  But all of a sudden… it all matters. China’s economy tanks, and ours enters a downward spiral. A terrorism group is making threats that feel much too real. And everyone is scared.  We are terrified.

Trump is speaking to this.  He’s promising to bring America back to its homogenous glory.  To eradicate the diversity.  To build walls, extract Muslims, blow up ISIS.  He makes promises no other candidate dares to whisper.  The other candidates have been groomed their entire lives for these debates.  They understand our judicial system and what can and can not be passed through parliament.  Trump? He just bellows over all of them.  Screaming at the Americans who are lost in their ignorance and fear… telling them that he will put America back in its bubble.

We’ve never had a presidential candidate like Donald Trump before, and for good reason. There was a time when whoever was in office was a respected gentleman. At first, it was a bit of a laugh, this tyrannical toupee totting buffoon with boatloads of money.  Something for the rest of the world to chuckle at — oh those dumb Americans. But when the laughter died down… he brought out something really ugly in us. Visit an American friend’s facebook and you’ll see what I mean.  The hatred is rampant.  Trump has given Americans a hallpass for declaring their racism and sexism publicly, something I thought we had long moved past as a nation.  The ramifications of electing Donald Trump will ripple across this world with such force that it makes me shudder.  There goes our foreign relations, our negotiating power.  In place, we’ll be at a heightened sense of alarm for terrorist attacks.  And how could we not be?  With the president of our country – an elected president by the people – making ludicrious threats at entire religions and races? Now I’m the one that’s fearful. This isn’t about a presidential election anymore, it’s about the integrity of our nation and upholding some semblance of humanity and progress.

I hope I was able to enlighten you a bit on the Trump supporters… what drove them to their fate. They are not all racist bigots, and I believe that whole-heartedly.  They are just a bit ignorant and tremendously fearful.

PS. If America loses and Trump wins, we can continue this conversation over Tapas in South of Spain.  Or perhaps Capetown.  I heard it’s a lovely place for an ex-pat.

Show us some star love:
Your vote is so very appreciated, thank you!
Share
goppresidential debatepresidential electionrepublicantrumptrump2016