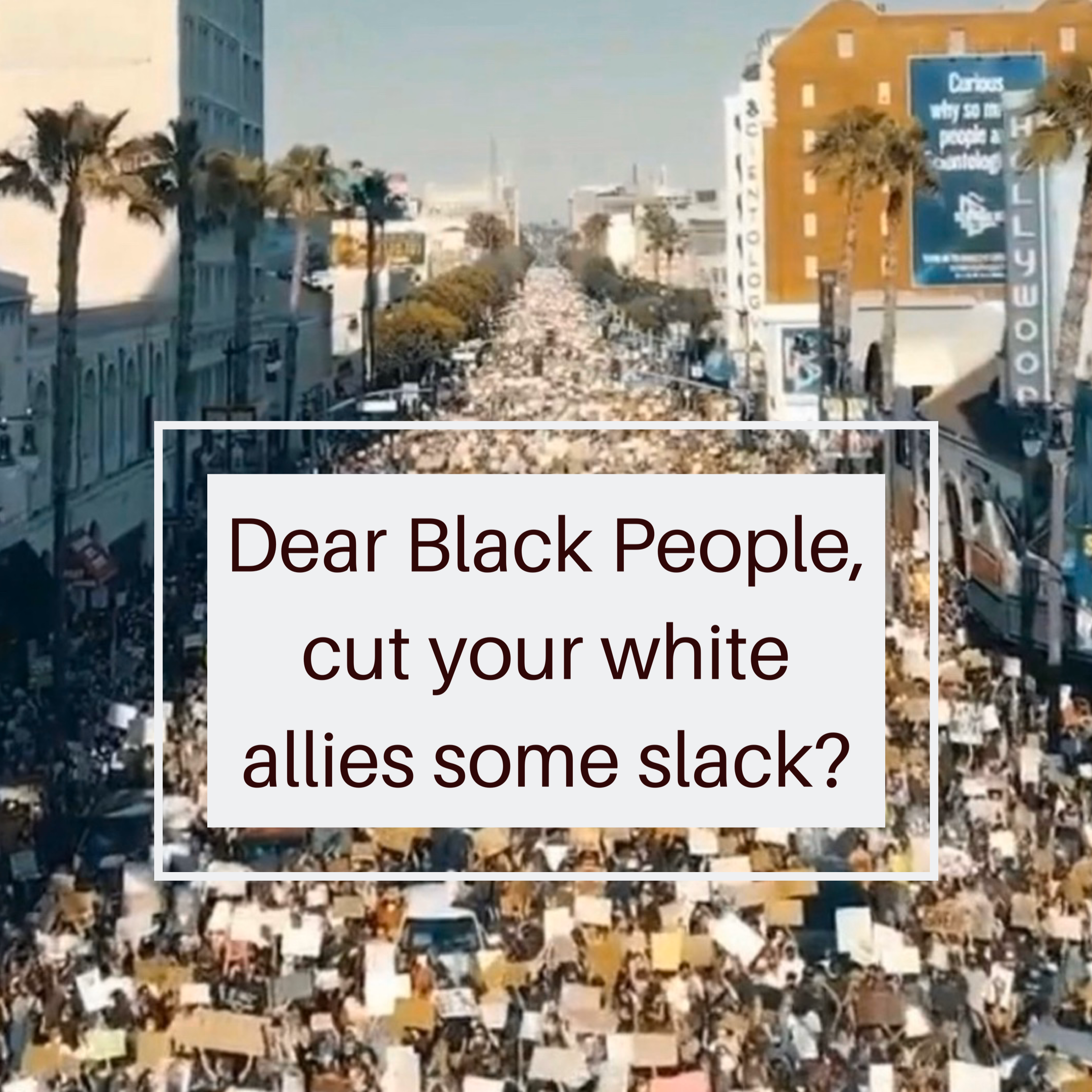 And so I repost Black quotes, I donate, I make signs, I protest in the streets. I mute my account to help raise Melanated Voices. I watch heavy documentaries, I have tough conversations. And I meditate, a lot. I sit with the notion of white privilege and try to really grasp the rewards I’ve received in my life as a result. I try. and I will continue to try, and learn, and cry, and march until there is actionable change. Until legislators take note, police and their chiefs are held accountable for brutality, until there is justice and peace.

And so many white people have stepped up to do the same. But I have picked up on a general resistance, shame and confusion amongst white allies of Black Lives Matter. We are being scrutinized for every word we do – or do not – post. And yes, I realize the irony, but I truly believe we are stronger together. And shedding a little insight on the subject just might cause the right ripple effect to keep the movement’s incredible momentum.

I’m not condoning white silence, or white in-action, or even white posts that miss the mark. But we’re wasting precious time attacking the wrong entity. I see all over social media that people are screaming ‘too little too late’ to the white void of sheepish instagram solidarity re-posts. And you’re right. Your feelings, your anger, your passion is all validated.

But the consequence is white people who want to join the fight against racial inequality feel paralyzed by negative feedback.

If they don’t post anything, they are called out for their silence. Of course, speaking up is always preferable to staying quiet. Silence is compliance. But many white people don’t know where to start or what to say, and they’re afraid their words will come out wrong.

So, they ease into the waters and post the blackout square for #blackouttuesday. And they’re ridiculed by many for causing Black voices to be drowned out on social media by the scapegoat black squares. It is NOT ENOUGH, but it is a start.

Or maybe it is a company that treads too lightly in their PR statement, avoiding the uncomfortable topic of police brutality and white privilege. When Ben & Jerrys puts out the most veracious statement ever, the others are put to shame with backlash. Perhaps left wondering if they should have said nothing at all. But while it is NOT ENOUGH, it is a start.

On a personal peer-to-peer level, countless posts have circulated urging white people to refrain from asking how their Black friends are doing. And maybe there is a lot of truth to Black People asking for space from their white friends. But in the same vein, couldn’t you argue that not reaching out is another form of white silence? How can one Black person speak for everyone? What if there are some people out there who are struggling with their mental health and need a true friend to check in on them? What if they feel alienated, scared, and alone?

We Will Stand With You, if You’ll Have Us

At the Saturday afternoon protests in Pan Pacific park, there were 1000s of people in every direction. Black Speaker after speaker took to the stage to enlighten and inspire the crowd, which was largely white. One speaker challenged, ‘if you came here against your will, or you’re just here to take selfies, leave now’. She repeated ‘leave now’ while another girl on stage pointed towards the park exit with fervor. And again, yes. I see the point. We are all disgusted by the ‘influencers’ using the protests as a backdrop for their Coachella-esque photos. It is beyond insulting to preach the movement because it’s trendy. But here comes the devil’s advocate.

What if, no press is bad press? What if the guy who was dragged against his will ends up being inspired by the palpable energy? What if those photos of that tone-deaf chick pretending to help board up businesses just for a photo opp is still spreading the right message in her post? What if by calling out white people for their intentions it discourages them from taking photos, from posting, from attending the protests?

If we continue to scrutinize every action, it will lead to in-action. All of this discouraging creates shame and cultivates fear of speaking up and joining in.

I will never understand what it feels like to be Black in America. I can watch all the documentaries, go to all the protests, read all the right books, and I’ll still never get it. I can’t speak for Black People. All I can do is speak up with them, and try every day to use my white privilege for the greater good. My intention with this post is to keep white people fighting long after the protests have stopped making the news and the hashtags fade out. This is all of our fight. Let’s band together to really make America great, not again, but for the first time ever. If we keep fighting, we will see justice. And with justice, we will see peace.

To my black friends, I love you, and I’m sorry. I’m messy, and fumbling, and far from perfect, but I am trying. I won’t be discouraged. I vow to continue to learn and evolve. And I will stand with you, now and forever. This post isn’t intended to call you out, just to shed some light on a trend I’ve seen. You don’t owe it to white people to consider their feelings or to coddle them. My point for this post is there is strength in numbers. Social media has offered a new unprecedented avenue of outreach. I want every white person who is supporting BLM to use their platform to impact their audience. Yes, we deserve criticism for our ignorance. But I feel that the criticism is better served against the common enemy. That is the true essence of this post.

To my white friends, IT IS NOT ABOUT YOU. STOP BEING SO SENSITIVE. STOP MAKING EXCUSES. STOP BEING IGNORANT. IT. IS. NOT. ABOUT. YOU.

It is time to wake up and to speak up. Make no mistake that silence is not an option and this post was not written to defend you. You’re either on the side of the oppressor or you are standing up for equality. Listen to your heart, and do what is right. Cut ties with the racist people in your life and surround yourself with a progressive and supportive community that pushes you to be better. Hatred is toxic and love always wins. Choose love. Over and over again until there is justice.

Stay safe everyone, and keep fighting the good fight. <3

If you find fault with this post, please, speak up. I want to have the difficult conversations. I want my views challenged. I want to break down walls so I can rebuild a new foundation on empathy, compassion, and love.

I have been featuring Black travel and health accounts on my instagram @organictravel – if you, or someone you know has an inspiring account to be amplified, drop me a DM. Similarly, I would like to feature Black Voices here on TravelingFig. If you’ve got something to share, please reach out to me. You deserve to be heard.