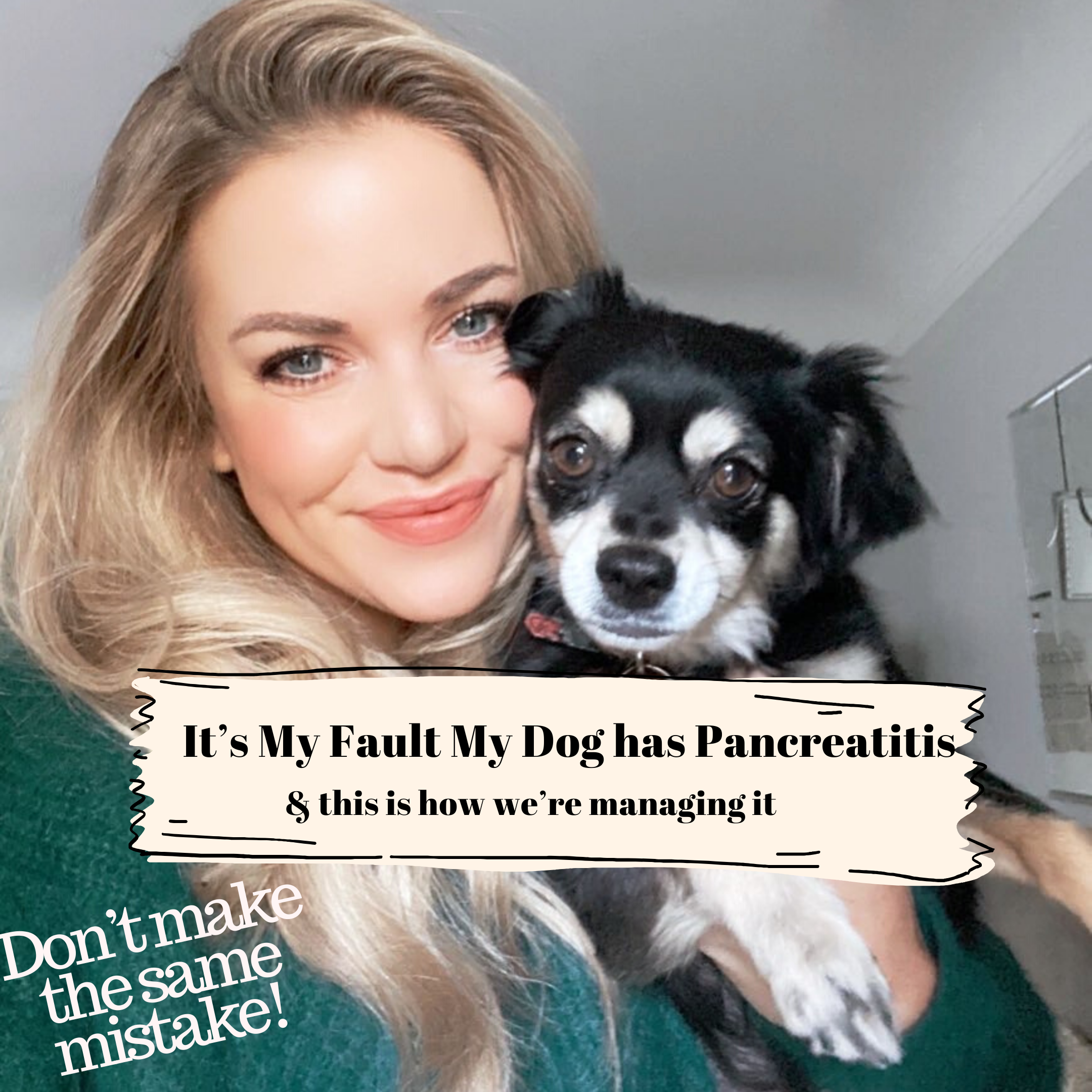 My little chihuahua mix has been quite the handful since that glorious day when my husband brought her home from the Shell gas station up the street. Don’t get me wrong, Shelly (yes, after the gas station) is a sweet cuddle bunny who loves to snuggle, but she doesn’t exactly have the best manners.

When I first held her, she was just a tinsy tiny little thing, no bigger than a guinea pig. The vet warned us that her stomach might never develop correctly because she was weaned off her mom’s milk too soon and the *insert explicit word* that were ‘taking care of her’ were feeding her cow’s milk instead. But all that was forgotten quick once we got her home and realized she had an insatiable appetite and seemingly iron stomach.

“of course you can give ’em a bite, we’re cool dog parents!”

True to her street upbringing, she has always been a scoundrel for food. She’s not above climbing onto the dining table, sneaking something off your plate, or hoovering up every crumb as it drops from the kitchen counter. This dog is beyond treat motivated. She stops dead in her tracks and basically does a back flip if you even mention the T word.

So 7 years later and we’ve been more than lax with Shelly. Giving her scraps here and there and letting our friends do the same. We were feeding her shit kibble (Purina) for awhile until one of their big recalls switched us to Stella and Chewy kibble + freeze dried bits. And, of course, we had a cabinet stuffed with whatever treats were on sale at the Marshalls checkout line. Every checkup, the vet warned us she was a little too plump, but she still had great energy and was able to do the 2 MI hike around Runyon with ease and regularity. So again, we didn’t think much of it.

This is a good time to mention that she was also having accidents most nights. Just to put it in perspective, we were accustomed to buying new rugs every 6-8 months. We chalked it up to her small bladder and her reluctancy to use the dog door (and our laziness at walking her habitually before bed). Every time I wasted another $200 on an area rug I vowed never to get a small dog again.

As our older pup Marley began showing his age, we started to get more serious about their health. We began adding pumpkin and fish oil to their meals and switched out some of their kibble for Just Food for Dogs fresh cooked meals. The new food was expensive, but our main concern was keeping Marley’s vitality. Shelly just happened to be a beneficiary.

This brings us right up to Thanksgiving 2019. My dad was out visiting and we had stopped at my favorite tea place. I ended up buying this dark cacao bar with 23 medicinal mushrooms and herbs baked into it and threw it into my bag. I got home, put my bag down on the floor and Shelly ran right over and shoved her head in it to see if I brought her home any treats or toys. “There’s nothing in there for you Shel” I told her, forgetting all about the chocolate bar.

Well Shelly, of course, ate the bar. And I was worried. But not too worried. You see, Shelly has eaten an entire dark chocolate bar before and lived to tell the tale. Plus, just a few weeks before, at my annual Halloween party, I caught her eating cake and candy on multiple occasions while I cleaned up. So I monitored her. She didn’t puke, and life went on as normal – as if nothing happened.

A few days later we had 22 people over for Thanksgiving dinner. There were 6 dogs running back and forth under the table and everyone was feeding them left and right. Per usual, we played the ‘cool dog parents’ and didn’t forbid anyone from sharing with Shelly.

Cleaning up later that night I saw piles of dog puke under the table. It could have been anyone’s. I wasn’t worried, cleaned it up, cursed that I had to buy ANOTHER rug, and went to bed.

Over the next two months Shelly started puking and having diarrhea more frequently. I switched her food flavor, I added pumpkin, took away pumpkin, tried digestive enzymes, gave her probiotics. She would have a few days where she seemed ok, albeit lethargic, then be right back to puking all night long.

At her annual physical in January 2020, she hadn’t puked or had diarrhea in the house for a week so I forgot to mention it. I was hoping it was behind us – and I truthfully hadn’t even seen her past 3 weeks before that while we were traveling in Asia. The dog watcher said Shelly had been fine, and I had no reason not to take his word for it.

“A heart murmur, but she’s so young?”

The vet didn’t pick up on any digestive issues with Shelly, but he did find a pronounced heart murmur, which concerned me gravely. She is really young to already have a heart condition. And we keep her so active – what does this mean for us? For her? The vet suggested a (pricey) heart xray and told me we’d have to monitor it closely. He left me with a warning:

“If she starts coughing, she’s having heart failure.”

He told me if this happens, I should take her to the vet immediately. I left hyper-sensitive to her condition and began coddling her at home. A few days after the check-up, she had another bout of diarrhea and vomit all over the house. I mean… on our bed, on the rugs, on the couch, on Marley’s dog bed. She couldn’t control herself, and she was weak. She couldn’t take sips of water and she swayed back and forth looking delirious. Matt was already asleep when I got home late from teaching yoga. I was cradling Shelly when I heard, what I believed, was a cough coming from Shelly.

I scooped her up and rushed to MASH, a 24 hour animal hospital near me. After blood work and some testing, the vet told me that Shelly had not been coughing (it was some sort of reverse sneeze), but she did show signs of pancreatitis.

“Pancreatitis is inflammation of the pancreas, where the dog’s digestive enzymes start actually eating the pancreas itself. It is irreversible and she’ll have it for life.”

My heart sank. Of course. I made more appointments for ultrasounds and left with my little girl wrapped tightly to my chest. I was told not to feed her anything for 24 hours while her pancreas had a chance to reduce its inflammation. It seemed cruel for my food hound, but she, for once in her life, didn’t want to eat anyways.

So how is it your fault?

I didn’t watch her enough, fed her people food, and let others do the same. I can trace Shelly’s pancreatitis back to Thanksgiving. Perhaps it was the chocolate bar, or whatever combination of food she ate under the table that Thanksgiving night, but those incidents caused her pancreatitis. An irreversible condition she has to live with for the rest of her life. And that I have to live knowing I could have prevented.

At the direction of the vet, Shelly has been put on a low-fat real food diet. She has been taken off of grain free because of her heart condition. So her food is now the turkey and whole weat macaroni blend cooked fresh from Just Food for Dogs. We still buy a few at a time and keep the ones we’re not using frozen.

And guess what? Not only has she lost 5lbs to get to her ideal weight… she also hasn’t had a SINGLE ACCIDENT since we took her off of kibble completely. Not once! and it has been 4 months! *REJOICE*

Has this changed our lives?

Yep. We’re not the cool dog parents anymore. We’ve graduated to the helicopter kind. The new food demands a bit more planning, there are more expensive vet bills, and I’ve spent 1000s of hours reading blogs just like this one. I also have to keep a more careful eye on Shelly when we go on hikes. I pick her up frequently to help her slow down that heart rate, which, again, is totally not cool dog-parent protocol.

Here are some of our favorite dog supplements and treats we give Shelly.

CBD: for inflammation, we give her 43 Solutions CBD, I take their hooman version too.

I also give her CBD treats sometimes too. I love holistapet. We found them because of the CBD hip and joint treats we give Marley, but that’s another topic for another post (that’s coming soon!).

And this is the food we give her from Just Food for Dogs. You could easily make a similar recipe at home if you’ve got the time.

I’m part of the amazon affiliate program so if you shop my links I get a little baby kickback that helps keep this blog up and running.  Whether you shop my links or not, thank you for being part of the TravelingFig Community, I’m so happy you’re here!  If you’ve got an tips to share about how you keep your dog healthy, please share them below!