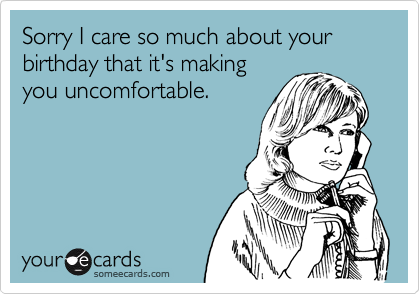 As a non-celebrator of my own aging, I usually avoid throwing myself a Boston Birthday Bash.  BUT I absolutely get giddy over planning for someone else’s big day and stress for ions over where to have the hooplah!

here are my top favorites based on the personality of the honoree.  I broke it down specifically like this because, contrary to popular practice, the birthday party should be centered around the person actually having the birthday, not what will please the masses.  Just because the birthday girl/guy was nice enough to keep lazy, jobless Eddie as a friend, doesn’t mean you can’t go somewhere classy for the party because your’e worried Eddie won’t be able to afford it.  Screw Eddie!  If he’s smart he’ll use this as an opportunity to make some money and he’ll drive everyone to the bar in his ’92 Corsica at $10 bucks a head.
Anyways,
For the Eddies (lol); the friend who doesn’t like to spend a lot of money, favorite show is STILL South Park, and who thinks buffalo chicken is a food group.  We all have, and we all love (sometimes) our Eddies.
This person has a large group, and variety, of friends.  He/she is laid back, prefers beer to martinis, and doesn’t like to miss a New England sporting game.  Works hard, plays hard. Chose someplace with a little bit of a dance floor, plenty of room and affordable drinks.
For the friend who is classy but not a club goer.  He/she likes nice things and owns their own suit (fellas) or a nice designer bag or 4 (ladies).  This is the guy who brings the specialty seasonal beers when everyone else gets a bud light and the girl who makes impeccable desserts for holiday parties that look too good to eat.
This Birthday Brat is wild.  They love house music, dancing, think youtube videos are a suitable hobby and spend too much time getting ready and worrying about appearances (yes guys too)
Show us some star love:
Your vote is so very appreciated, thank you!
Share
bijoubirthdaybondBostonboston beer worksboylston streetcheerscity barclerysdillonsdrink 28 degreesestatefajitas and ritasgreatest barhypsy barle petit robertliberty hotelmarketnorthstarroyalesidebarsonsiethe foursthe harptommy doylestowneumbria