A Halloween in Hollywood 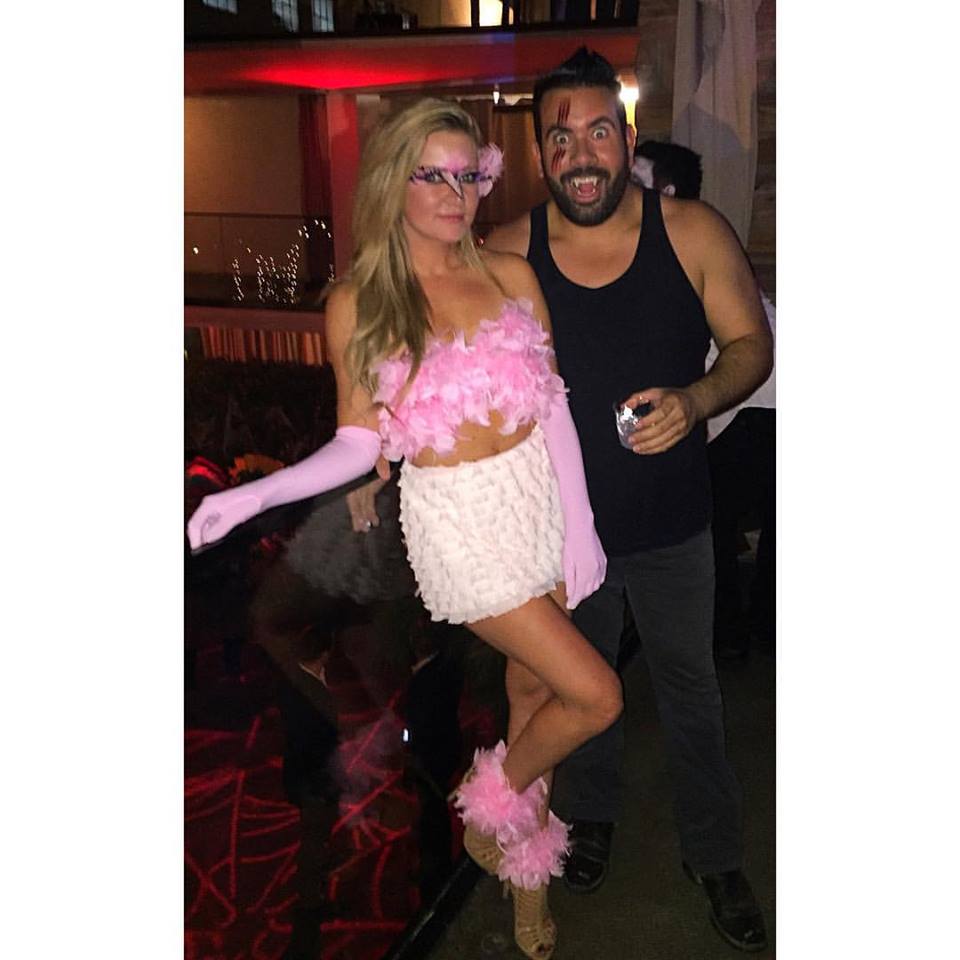 Please forgive the following posts for the abundance of exlamations caused by an extreme fructose overload.

For my first ever Hollywood Halloweenie, I will say that I am quite smitten with the experience.  Granted my expectations were kind of low – knowing nothing will compare to actually growing up in an honest to god haunted house surrounded by cornfields a mere half hour drive from Salem, MA – but really, Hollywood does a 4.6 star job in delivering ghoulish delights.
It all began a week ago at our ‘LA family’ Halloween spectacular.  The night was complete with pumpkin carving (arguably one of my only talents), pumpkin pie, a copious amount of wine and pasta and a trip to the LA haunted hayride by the bowl.  While there was no formal pumpkin judging, it is clear from the photos below that my “wicked” pumpkin displayed not only creative genius but a fine craftsmanship.  As for the haunted hayride, it was theatrical and a lovely display of out of work actors in fancy costumes prancing around in even fancier ‘sets’ throughout the ride.  Dont get me wrong, I squealed and screeched through the entire $36 dollar for 30 minute hayride, but this is in no way a comparison to the hayrides in MA.

Which is a lovely segway into Knotts Scary Farm.  11 mazes plus one that you pay 60 for that is interactive (i.e. the creeps who chose to work at a place where they dress up as killers and scare children are paid extra to touch you), all the rides and food vendors stay open and the park is crawling with zombies, goblins and vampires are just waiting to scare the life out of you.  I was scared, but not I-cant-breath-if-another-masked-man-spooks-me-i’m-going-to-pee-my-pants-and-get-into-the-fetal-position-scared like I thought I was going to be.  Albeit, I was impressed.  To give you a taste of how over the top creative these mazes get – one maze was the story of Pinocchio, except his wish wasn’t granted and he didn’t become a real boy so he hacks up good ol Jepetto, the fairy, and everyone else, wrips off their skin and sews it to his wooden body so he can be a “real boy”.  Let that sink in.   On another note, the churros might be the best I’ve ever had and they come with knotts jelly dipping sauces. bomb-a.

Spent a full 12 hours partying at the Roosevelt on Sat.  It was foolishly over crowded, the table arrangement was horrific and girls had lost all creativity and gone simply as sluts without even putting the effort in to slap on a pair of cat ears and color their noses pink. I broke the mold by cleverly sewing my own I dream of Genie costume by hand. (applause not only welcomed but encouraged if you plan on continuing reading my informative halloweenie post). ((no really, clap at your computer)).  Honestly if we hadn’t been with guys so kind as to rent two cabana rooms overlooking the pool, Halloween at the Roosevelt might have been a bust.

Instead of catching an hour or two of sleep, i decided to go straight from partying to drinking poolside at the Roosevelt Sunday morning (which consequently was my 25th birthday, which explains the quarter life crisis).   Cocktails, a brunch and some present opening later and we were off to the house parties of all parties.  If i had any followers I really wouldn’t be able to talk about it, but lucky for me my blog remains to be un-read.
Picture this.  a mascarade ball in a 30 dollar mansion where Sebastian Ingrosso and Alesso were BOTH flown in to dj.  I can’t allude to the crowd, but it was epic.  Of course I couldn’t enjoy any of it because someone forced (politely asked) me to take 3 tequila shots in a row after i had drank my weight in champagne.  sigh.

And now it is finally Halloween night, and I just finished 1/2 lb of the See’s candy chocolate box I got for my birthday (really, I actually ate 10 pieces of the 20 chocolates.. in one sitting – and yes, I will be complaining about this for the next 2 weeks of blog posts while I juice fast and work out like a lunatic). I do miss the foliage, actually haunted houses, and maze workers who aren’t actors and wont be sued if they touch you mistakenly, but I feel completely satisfied with my Hollywood Halloween.
Now let the Christmas music ring!
Show us some star love:
Your vote is so very appreciated, thank you!
Share

Present Guide for your Boho Significant Other