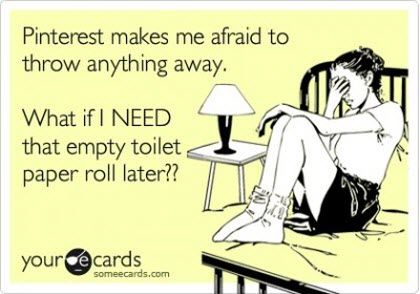 1. Before pinterest, crafting was for elderly women.  Who has time to sit around and crochet a scarf when you could go buy one?  But you just took up knitting. And baking.  And crafting.  And now Pier One Imports has stopped sending you their loyalty emails since it’s been so long since you’ve stepped foot in their store. I mean, why would you when you can make it yourself?

2. You don’t even have a boyfriend but you have your entire bridal shower and wedding planned out on your boards. And of course a board with your top 10 favorite engagement rings.  And another with your dresses.  And another just for the wedding flowers. Well and that other one of proposal ideas.  What? Your future boyfriends going to need help, you’re just being proactive.

3. You know what your favorite fashion bloggers had for breakfast lunch and dinner, what color their nails are and can recount their full OOTD from shoe to scarf …. but you’re not sure if your best friend gave birth yet or not.  Or if your sister is still hanging out at med school. What?  if they really want you to know something, they’ll pin it.

4. You have an entire separate closet filled with mason jars, wine corks, buttons, newspaper, yarn, etc.
just waiting to be turned into a pinworthy masterpiece.   I mean, think of it this way, you have to take the trash out SO much less now.

5.  Your cat has its own board. with followers .It’s named “Simply Fluffy” with all the captions: “Just Fluffy Being Fluffy”

6. You held a ‘just because’ dinner party… just because you wanted to cook and bake pinterest recipes then repin them on your board as your own.

7. This just because dinner party didn’t actually have guests… but the photos came out great!  I mean you would have had friends over, but someone would have messed up the handmade napkin rings and amazing place settings.. or worse bit into the casserole before a picture was taken with the right lighting.

8.  Speaking of lighting – you’re getting really artsy with these photos now aren’t you?  You’re not born a pinner, it’s an acquired skill that demands respect. #pinlife

9.  But I mean, don’t get me wrong.  Just because you didn’t actually have friends to your dinner party doesn’t mean you’re a loner.  You always accept others’ invitations.   How else are you going to start crossing off your baking board ‘must – make!!’ then repin for the world to see?

10. You feel like you eat raw, gluten-free and clean because you like so many photos of kale smoothies.  Well, you actually are gluten intolerant… but that doesn’t stop you from cooking this years ‘melted snowman cookies’.  I mean they’re all over pinterest, it’s basically a right of passage to cook and eat them.

11. You would never text and drive, that’s dangerous.  But simply scrolling through pinterest boards while stopped in traffic? Really not a crime.

12. You homemade personalized birthday cards for all of your friends this year!  but you kept forgetting to buy stamps to send them.  But, really, isn’t it better for them to just see it on pinterest anyways? It must make them feel special it got so many likes.

13. You have to watch The Bachelor twice because you miss so much while pinning.  That and your eyes can’t stay glued to the tv like the good ol days.  Now they scan the room scheming for new craft ideas.

15. You thought Loews was strictly for carpenters until pinterest.  Now you have more points than your dad does… and you’re buying crates, and lumber, sand paper and screwdrivers!   …and your dad actually is a carpenter.

16. I mean really though.  Before pinterest, would you ever have thought to take an old beat up dresser, sand it, paint it, then sand it again to make it look vintage, then add mismatched antique knobs.. and take a picture every step of the way?

17. You go shopping in stores you can’t afford to try things on things you would never really wear to take dressing room photos.  You’ve even been so daring as to get the sales associate to snap a photo of you because the lighting in the dressing room was off.  (I told you you were getting good at this)

18. You lay down in bed at 10 but your Pinterest but the light on your phone from Pinterest doesn’t go off until one… and  the only reason you stop scrolling at one is because you keep seeing the same photos over and over it’s not because you’re actually bored

19.  You NEED pinterest to survive.  You can’t get dressed without it, can’t buy a gift without scrolling through gift ideas, can’t head to that dinner party without looking up appetizers, can’t fathom getting married without it, how would you do your hair and makeup for an event without consulting it, or your nails?? And not to mention decorating your home, stalking celebrities, picking out your next tattoo, planning your next travel vacation… what did we DO without it?!  How did we live?!

20.  But in all seriousness. There’s a pin for everyone and every pin has it’s place.  Pinterest is a wonderful place where all hobbies and passions are respected.  A community of lovers and supporters, of dreamers and thinkers.  A place where you can find a board filled with uplifting quotes to brighten a dreary day or scroll through photos of adorable animals.  Pinterest is a community that gives every pinner confidence and a voice… and it’s also a place that fosters creativity and curiosity – a place where everyone is encouraged to dream big.

Show us some star love:
Your vote is so very appreciated, thank you!
Share
addicted to pinteresthumorpinterest