The Best Day of My Life: Patara Elephant Farm in Thailand 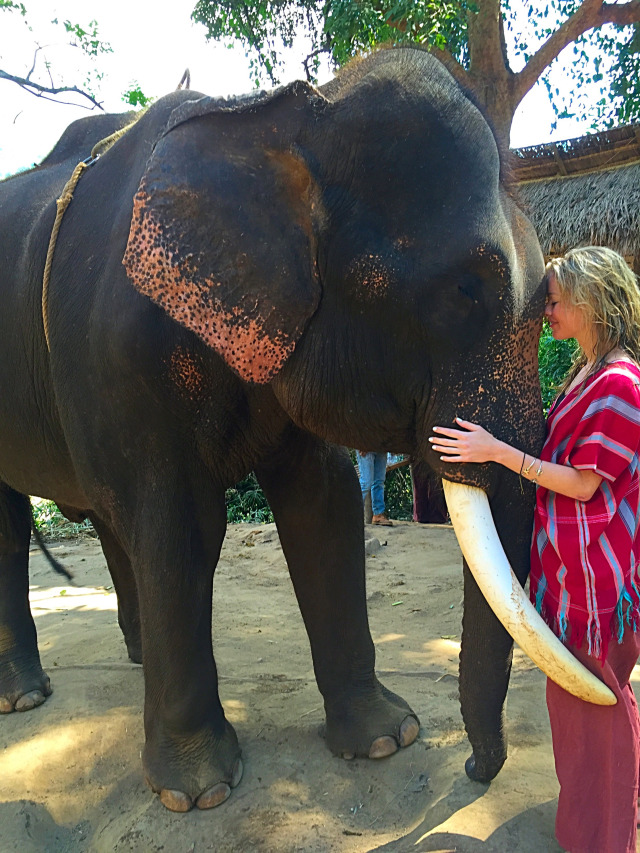 You wake up in your rice paddy villa and enjoy fresh mangosteen and rich coffee on your porch as the sun softly sparkles in the horizon.  You anticipate that your day ahead is going to be wonderful… but you have absolutely no idea that it will drastically change your life forever.

The shuttle van barreled down the dusty road, slowing only slightly at the sharp corners. After an hour or so drive, we abruptly screeched to a stop at the end of a dirt road.  And as the dust settled, I couldn’t help but murmur that it felt like we were in Jurssaic Park.

A mere 20 feet ahead of us, were the most majestic animals I had ever seen. I had only read about them when I was going through a post called “Things to do in Phuket” but then looking at them right in front of my eyes, was simply breathtaking. They looked almost astute as they flapped their ears back and forth and let out these trumpet roars from their long trunks.  Amongst the herd were a handful of tourists, snapping photos and laughing wildly as they stumbled over one another to get their up close and personal snapshots.

I hung back as my travel comrades hopped from the van, their camera lenses already focused.  Truthfully, I felt a bit down trodden by the sophistication of the farm.  I had been hoping for a more raw experience.  I yearned for a real glimpse into life in the Thai jungle.  But perhaps that fantasy is only something that exists in a Disney Movie these days.

Right as the novelty began to wear off of the short attention spanned tourists, we were corralled under a thatched roof hut.  Here, we were greeted by one of the owners, a livened and well spoken man with a heart of gold.  He began our introduction by delving into the magic that goes on at the Patara farm.

The farm has been in the family for generations now, but they are hardly the only caretakers for the few dozen elephants who inhabit their property.  There is also a village of people who live in conjunction with the animals.  Actually, it might be more accurate to say that they live for the elephants. You see, upon birth, each elephant is given a human, or perhaps the human is given an elephant.  Either way, these two spend their entire lives together.  Every single day of it.  The villager’s main prerogative is keeping his elephant healthy and happy, and in turn I’m pretty sure the elephant reciprocates the deal with a friendship like no other.    I was mesmerized by the notion of living your entire life on this one remote speck of the earth, married to a 10,000 pound prehistoric looking beauty. Mesmerized and enthralled.

The owner spoke in length about the farm’s mission to rehabilitate a terribly endangered species. The dwindling jungle land, the poachers hungry for ivory tusks, the circus acts and neighboring attractions neglecting to care properly for the gentle giants.  We were warned that if we ever saw an elephant with a metal riding seat attached to his back, that he was being subject to excruciating pain, if not permanent spine damage.  We learned a lot in the brief welcome, and it became obvious that this place was much more than just a tourist attraction.  Patara elephant farm is a sanctuary.  One that is gracious enough to allow tourists to visit and help take care of an elephant for a day.  To walk them the appropriate amount of hours, bathe them, feed them, care for their health, and.. of course, fall in love them.

And my day was just that, a love affair.

We were split into two groups and driven down to a waters edge, where another handful of elephants roamed about enjoying their early morning hours.  The owner claimed he was a great judge of character, and would match elephant to human based on personalities.  So it was no surprise when I was paired up with a adventurous 19 year old male called Boon Pat.  A fiesty brute with the most magnificant ivory tusks and these deep soul searching, yet playful eyes.  Only a minute into our first greeting, as I gingerly placed bananas onto his enormous sloppy tongue, and I was head over heels.  Smitten wouldn’t even begin to describe how my heart melted with each banana he gobbled from my basket.

We learned to check their health by looking at their eyes, nail beds, dirt on their backside, and their feces.  Yes, their poop.  I wasn’t surprised when I was chosen as the guinea pig to demonstrate how we would check our elephants health.  But you can bet that I was shocked when I was asked to go pick up Boon Pat’s… waste.  While the other 10 in my group giggled, I went over.. scooped it up with both hands and brought it back to the group for inspection.  Turns out, he was pretty healthy.

The rest of the day was simply magical.  Before my day at Patara I would have said it was like I was floating on clouds all day during my visit.  Now my reference for breathtaking experiences will be, ‘it was like I was riding Boon Pat through the jungle all day’.  We went down to the river to bathe him, his big trunk pushing out bubbles as I scrubbed him clean.  Then it was a climb up his front leg to ride him for a few hours through the dense greenery of Thailand.  We trudged on and on, most of the other’s tiring of the bumpy ride. But not me, I could ride atop Boon Pat for eternity, and then some.  Yes my cheeks were sore.. but not as much as my other set of cheeks from the enormous smile I couldn’t wipe from my face.  I’m smiling now, 6 months later and on the other side of the world, just relishing in the memory.

A few hours into our journey we stopped for lunch.  At a communal table with a banana leaf for the table cloth, we enjoyed the vibrant and exotic fruit spread before us.  The lunch alone was one of my favorite dining experience in southeast Asia.  It had a lot to do with the elephants, my new friends, grazing around us and a little to do with the my peaked serotonin levels, but the food was just wonderful.

A less than graceful hobble up Boon pat’s trunk and we were off again, this time on our way back home. I reached down, with my eyes closed and gave Boon Pat a hug, silently praying that this day would never end.  We wandered on through the jungle, slowing by the makeshift village where the handlers… or should I say elephant devotees, reside with their families.  It was a simple, but beautifully refreshing existence.  And as I saw the kids merrily playing nearby, and the line of elephants in front of me, I understood completely.  This is far from a life sentence to be paired indefinitely with an elephant, it’s the highest honor, a true blessing.

Before I knew it, the sun was beginning to linger on the horizon and it was time to say goodbye.  My eyes were hot with welled up tears as I leaned my head against Boon Pat’s trunk, holding gingerly to his magnificent ivory tusks.  I wished I didn’t have to leave him in this frightening and cruel world, not with those tusks. With our eyes locked I tried to convey my heartfelt gratitude to him for the invaluable gift he had given me.   And with a wave of his ears, and a nod of my head, I parted ways with the most intelligent and gentle, majestic and powerful,creature I had ever encountered.

Patara Elephant Farm isn’t an attraction.  It is a life altering experience.  In the beginning of the day the owner told us that one day, maybe a year, maybe 5 years, from now we will wake up out of a dead sleep and yearn to return to Patara. The elephants will call for us.  Well, Boon Pat hasn’t let me sleep since the day i met him.

As humans we have this righteous sense of entitlement.  That because we’ve developed this system and multiplied in alarming amounts, that this world is ours for the taking.  But that couldn’t be further from the truth.  The earth and it’s inhabitants do not exist for our benefit, consumption, enjoyment… or in most cases, destruction.  We need to be more conscious of the consequences of our actions.  I fear for the day when the jungle… the elephants, the tigers, the vegetation.. is only a thing of history books, a figment of the past.

I thank you Patara Elephant Farm from the bottom of my filled heart, for giving me the opportunity to experience the righteous work you do.  You truly have changed my life forever and I will never go a day without cherishing the brief moment in time that I got to spend on your farm.  …If only everyone could spend a day with Boon Pat, this world would be an entirely different place.

Show us some star love:
Your vote is so very appreciated, thank you!
Share
Adventurechiang maipatara elephant farmThailandTravel

Planning your trip to Cusco + Machu Picchu: The Dos and Donts

Guide to the Best of Provence