A Letter to Trump Supporters Celebrating his Win 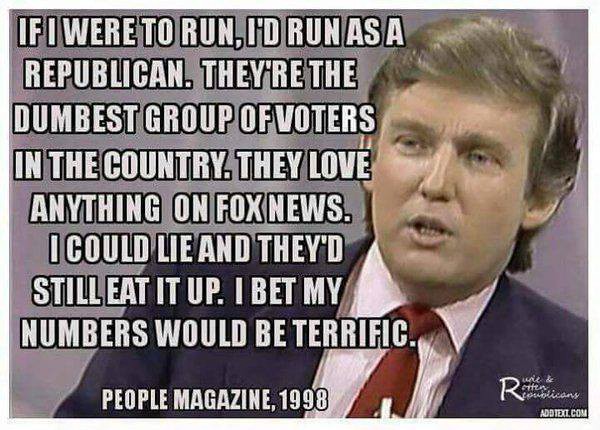 Trump supporters, How can you live with yourself?

I am angered and embarrassed to be American in an America that can elect such a hideously unfit reality star to the most esteemed and powerful position.  I’m shaken to my core by the racist and sexist sentiments that have clouded Trump’s campaign.   And I am absolutely sickened that today Trump will, for the first time in his life, receive the upmost sensitive information that the United States has to offer.

Before today, Trump’s world views and his policy proposals were based on media portrayal of current and past events. Of course it was easy for him to blame Muslims and propose a plan to extract them from our country (their home), since he is just as ignorant as we are into what actually is happening in the far east.   The speckles of information that the heavily censored and biased news outlets trickle down to us are a far cry from the reality.  How are we to actually form educated opinions on anything?  The White House is home to some of the world’s most sensitive and dark secrets.  And today, on Wednesday, November 9, 2016, Trump will hear it all.  What will he do with the information? Piercing his lips in the familiar ‘O.’  How will his campaign promises change?

Hilary’s wouldn’t have. Because she is already in that circle.  She has been bred for this position and is  arguably the most qualified candidate we have ever had run for office.  Can’t you feel how dire this is?? That Trump is now sitting where Hilary should be?  That he has to wake up at 6 AM and be president of the United States? Does he even really want this job? The responsibility? More importantly, is he intelligent enough to handle it?  Can he keep calm and levelheaded in the face of emergency?  Fuck repealing Obama-care, I’m worried about national security and the ramifications of having a time-bomb like Trump waking up with all of this power.

Trump supporters are largely middle and lower class, which absolutely boggles my mind.  They will get hit with worse taxes than ever before, lose health care, and have their small business gobbled by conglomerates for lobbyist interests.  So yes, you’ll get that ‘change’ you so badly wanted.

I am fiscally conservative.  I think Obama handicapped the lower classes by giving them a surplus of hand-outs that kept them from striving to achieve financial autonomy in our country.   Long term welfare programs should be abolished and the upper classes should not have their portfolios raped to have the government squander and misappropriate their money.  Healthcare should be available low cost for everyone, not free for the lower class while everyone else’s premiums skyrocket through the roof.  What needs to be regulated is pharmaceuticals, but that’s another post.

Socially? I couldn’t be more liberal.  I want my gay friends to marry, and a woman to have the rights to her body.  I want the death penalty to be abolished and for those on death row to have to sit the rest of their days rotting in jail reflecting on what they’ve done (also saves the country up to $1 Million in tax money per person).  I believe in global warming and that we need to act with urgency to clean up our environment before it is beyond repair.   I support legal immigration and to some extent, I appreciate the government regulating big business to level the playing field for small business to flourish.

I wish there was a party that married my fiscal conservatism with social liberalism, but between Democratic & Republican, it became starkly clear this election year that identifying as Republican in 2016 is unfortunately aligning yourself with rampant racism, sexism, and a campaign run on fear, bigotry & misinformation.

So I ask you now, as the dust settles, do you feel like you voted correctly?  Are you confident that Trump will leave the briefing this morning unaffected and push through with his vague and unrealistic campaign promises?

I guess we’ll see.  But my wish is that he will wake up to the severity of his position and start acting like a president more than an internet troll.

I pray from these election ashes a future leader will arise that can restore America to the greatness Trump is striping it of.  Until then, it will be a long four years of holding my breath.

Show us some star love:
Your vote is so very appreciated, thank you!
Share
imwithherpresidentpresidential briefingtrumptrump support