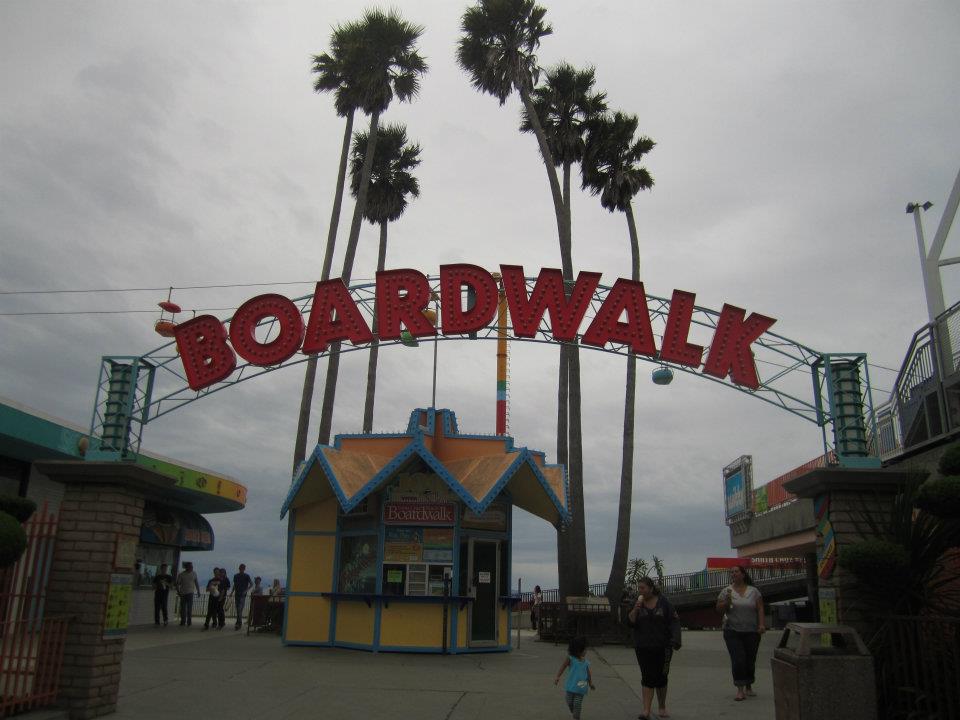 I take full responsibility for suggesting surfing to the producers.  In my defense, I pictured our lessons in Sunny California to be a perfect 85 degrees with a light breeze creating manageable crystal blue waves.  Perhaps I’m a dreamer, but what’s more synonymous with California than surfing at the beach?
The reality of this morning’s 8am surfing lesson was 60s and rainy, dark clouded waters and whipping winds.  Our enthusiasm was at an all time low as we squeezed into the wet suits and little booties.  We did find solace in our surf instructor Dylan, who couldn’t have embodied “California surfer” more perfectly.  On the sand, he walked us through the steps of surfing in a way similar to a yoga instructor.   Focusing on breathing and core strength was something feasible to me, and I started to feel (just a little) more excited than nervous to jump into the water.  The adrenaline pumping coupled with the warmth of the wet suit kept me from focusing on the chilly waters as I dove under and began paddling behind Jenny and Dylan.

As I struggled to glide over the breaking waves, I worried about the sea creatures lurking just beneath my board.  When we finally rested beyond the breaking point, Dylan passed on some wisdom that will forever stay with me.  He explained that you need to focus on breathing; on calming and steadying your own body and mind.  Without a clear head devoid of stress and worry, you will never be able to surf.  One deep breath later and I was paddling out to catch my first wave.  My wipeout to getting up ratio was heavily skewed to falling, but I DID stand up and ride (very ungracefully) a wave or two.  I felt the same pride and sense of accomplishment for my own achievements as I did watching Jenny catch her first wave.  We did it, and we did it together.
A few caught waves and a sea lion spotting later and our surf lesson came to an end.  After replenishing with lunch we headed to the boardwalk, another California staple.   The Santa Cruz boardwalk is home to the Giant Dipper, one of the worlds first wooden roller coasters.   All I can say is I was very wrong to assume that the coaster would be an easy ride since it was built in 1924.  After screeching over the steep drops and sharp turns, I felt like we successfully accomplished Santa Cruz.

But of course I can never let a good thing come to an end (only child syndrome symptom I suppose) and I convinced Jenny to play a ball toss game.  Six tries later and I didn’t pop one single balloon.  Not one.  And some little show off 6 year old next to me hit three right in a row no problem. Embarrassed beyond repair, I grabbed my stuffed squirrel consolation prize and dragged Jenny (who did actually break a balloon – just to show me up I’m sure) and headed South for Pismo Beach.

TODAY’S BUCKET LIST CHECK OFF
Standing up on a surf board – boo yeah! Check!
Erasing boo yeah from my vocab – fail
Visiting a California boardwalk – check
Big Dipper – check
Winning a big prize on a boardwalk game – giant fail
Alright well Jenny is basically comatose and sleeping sitting straight up (it’s way creepier than you can imagine) so  I suppose I should shut off the light and let her recoup.  I convinced her she wasn’t getting out of surfing.. but she could still try the sick card for dune buggys tomorrow morning.  I’m going to wake up and jog along Pismo Beach and try to capture the sunrise tomorrow.  Sooo California of me. 🙂
Paz and amor,
Chelsea
Show us some star love:
Your vote is so very appreciated, thank you!
Share
calicalifornia road trippchpismo beachsouther californiaSurfing