Stagecoach: What to Expect! 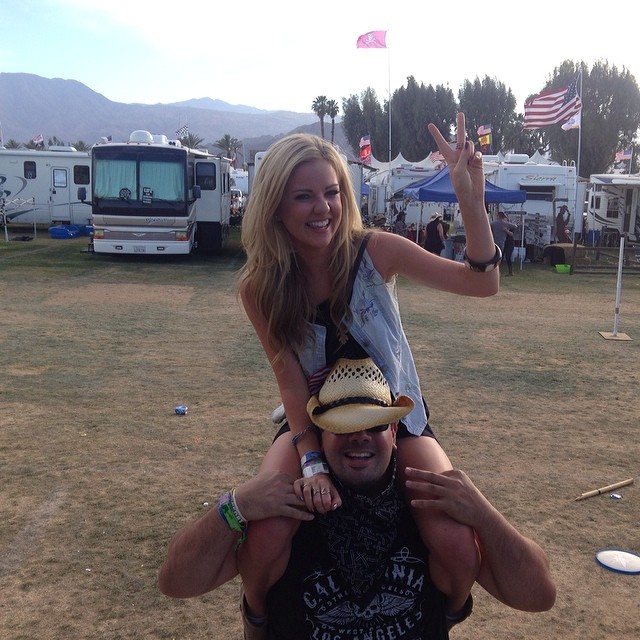 Coming off an epic weekend at Coachella, I had sworn myself to couch potatoism for at least the next month in hopes of partial mental and physical recuperation.

A mere 2 weeks later and I felt ready to emerge, agreeing to attend an engagement party in Newport.  It would be a mellow adult night of wine and fake laughter that I was genuinely looking forward to.  As I carefully applied lipstick in the bathroom mirror, I overheard two distinct words that stopped me in my glossing: “Stagecoach” & “tickets.”

I arose from my closet with such a clatter (too early for Christmas references? Bummer.) and stormed into the bedroom to confront my boyfriend, Matt.  I caught enough of the conversation to know I was included and seconds later I had traded my skirt for cut offs and my heels for boots.  Yee-Haw!

And so a weekend equal to Coachella only in epic-ness and location began.  And this is what I learned:

1.  Fashion. It’s not Coachella so don’t stress. Bring a cowboy hat and boots and you’ll fit in. That’s that.  It’s hot in the day, but can be frigid and windy at night.  And for Chesney’s sake (get it, Kenny Chesney = God), please wear your boots in before the weekend.  I felt like I was at prom with how many girls were carrying their shoes at the end of the night.

2. Don’t pay for VIP parking. It costs $100 and you park next to the regular parking. Save the money.  With $100 you can get… like… 5 beers inside.  Plus there are pedi cabs in the parking lots that will take you from your car to the festival for 10 bucks or so.  And another thing.  Do not drink and drive, there are cops and checkpoints everywhere.  If you can’t find a sober driver, Uber and taxis are sparingly available.

4. I know what you’re thinking. No dude, I’ll just leave alcohol in my car or RV and go out to grab some during the concert.  No.  You wont.  The festival is no re-entry.  But… no.  No reentering during the day that you go into the festival.  Your wristband will not work.

5. Which leads me to number 5. Where to pre party and after party. If you’re not staying in the RV park, you must shamelessly flirt with someone to give you an RV wristband.  The RV parking is half the fun of the concert.  Retired frat boys take off their shirts and revert to the good ‘ol college days while they play flip cup, sway the American flag, and compete for most female conquests.

6. Can’t rough it in an RV? I get it. They get trashed… and basically unfit for anyone to eat, sleep and …gasp shower… in after one night of debauchery. If I were you, I would rent a house in Palm Springs, Indio or Palm Dessert with friends.  Waking up in a bed and making pancakes and Bloody Marys to enjoy by the pool before torturing your liver for another day of festivities sounds pretty damn nice doesn’t it?  The alternative is waking up in a lawn chair outside of your RV, covered in dirt and unable to shower because someone threw up in the bathroom.  All there is for breakfast is warm bud lights and cereal bars.

7. Or perhaps… you are one of the female conquests and you wake up in someone else’s RV.… Imagine that lonely ‘walk of shame’ back to your trailer. Yikes.  People, I get it.  Country music exudes romance, but shaking a trailer while drunken shirtless guys chant “’merica” outside… mmm, a little less romantic.  If I were you, and I met the love of my life at Stagecoach, I would perhaps pursue the relationship at a later point in time.   Like on your detox next week when you can actually hold an intelligent conversation.

8. Which is a nice transition to my next lesson: Don’t be overly ambitious. I’ve moved off of talking about sex, get your mind out of the trailer. Do not be overly ambitious in terms of the festival.  You do not need to ‘get your money’s worth’ by waiting at the gates for the festival to open and staying late screaming ‘encore’ all three nights.   Prioritize.  And remember the NO REENTRY lesson?

10. You’re going to have one of the top 5 weekends of your life. Or at least I did.  Coachella is fun, but Stagecoach is alive.  At Coachella you stay with your friends.  It’s just as sceney and trendy as a night in Hollywood.  You might dig the line up, but there aren’t necessarily lyrics to scream to. The teenagers and young twenties festival goers will have black empty eyes from the drugs.  And well, it won’t really be about the concert.  It will be about the after party, or worse, the instagram photo.  …BUT AT STAGECOACH… the vibe is wholesome and infectious.  Here is a crowd of normal people in their twenties who hold 9-5 jobs and save for this weekend.  And they do it right. At Stagecoach, the boundaries between groups dissipate as you scream lyrics to your favorite Hunter Hayes song with your new friends.  And these aren’t just festival friends.  You can forge lifelong bonds with these people, staying in touch until you see them again the following year.  The common denominator not just being a love of country music, but being a real country fan.

Show us some star love:
Your vote is so very appreciated, thank you!
Share
country musiccowboy bootsfestivalstagecoach

Hocatt Ozanic Detox – Worth the hype?!

Lymphatic Drainage Massage – is it worth it?