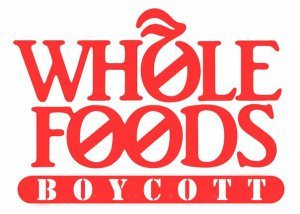 in Get Healthy, Life Lessons & Vents

Before we get into why I’m boycotting the supermarket that has been an almost cult-like staple in my life for 2 years, let me start with how I justify spending double (let’s get real, triple) on my groceries just to shop there.

In my quest for optimum health I want organic.  I want free range, grass fed, non gmo foods.  I want to ingest only the highest quality ingredients from the most pristine local farms. I want food properly packed (read more here about the latest packing equipment).  And for this reason, I shop at whole foods.  Sure you can get organic at Trader Joes and the farmers market, but I truthfully never fully trusted their claims.  How could the 50 cents avocados at Trader Joes be organic when Whole foods charges triple the price for theirs? And yes, other grocery stores carry organic.. but it’s so tiresome to scrutinize every single label before tossing it in the basket.  I trusted Whole Foods whole heartedly and felt confident that the groceries I was buying from them were the very best… as their astronomical price tags reflected.   And so my love affair with Whole Foods began a few years ago, and has flourished since.  First it was the endless salad bar of rotating healthy options (oh garlicky kale how I adore you), the fresh squeezed juice menu, the always innovative healthy packaged foods, the richest exotic chocolates.  And the produce!  How much better it tastes knowing it isn’t tainted by preservatives or pesticides!

And so thousands (upon thousands) of dollars later, I’m in deep with Whole Foods.. to the point where I am in the habit of stopping by once a day to pick up a kombucha drink and a hunk of salmon with the seasonal quinoa salad.  I mean, me and Whole Foods?  We were serious, even borderline exclusive.  But somewhere around September when I was piling the ginger beets into my salad bar container, I nearly choked to death on an olive I had snagged (Oh c’mon, like you’ve never done it).  The ginger beets were made with… canola oil??  In a panic, I started reading every single label… some were made with olive oil, some lemon juice… but the majority? with canola oil;  about half of which were labeled non-gmo canola oil.  Let’s back up.  Non-gmo doesn’t really even make sense… since there technically has never been a canola plant that existed naturally… and if it was actually legitimate, why wouldn’t they use non-gmo for every dish?  I shop at whole foods to AVOID canola oil, and here I was ingesting mass quantities of it daily from their prepared foods and salad bar.  I was disgusted.  (Why is canola oil dangerous?)

And so the scrutinization returned… as my once blissful ignorance was thwarted with the stress of label reading.  First the salad bar, then I noticed the packaged whole food brand products often contained less than desirable GMO ingredients. Isn’t the mantra of whole foods that they only stock their shelves with WHOLE, organic, healthy foods?  I guess not.

And while I felt burned by Whole Foods for not living up to their perceived identity, I continued to shell out money at their store. Until today.

In a quest to make a comparison chart that would help other consumers like me discern between plant based all-in-one nutritional protein powders I vowed to try every available brand on the market. (click here to see which brands came out on top!)  So naturally, I picked up a packet of whole foods brand nutritional shake in vanilla caramel.  The claims in bold: “Naturally flavored, and with 50% of the daily intake of 23 essential vitamins and minerals, plant protein, omega 3 EFAs, antioxidants, probiotic, digestive enzymes and greens”  sounded pretty good to me.   I went home, tried the shake and tossed the packet… only to discover that whole foods doesn’t post the ingredients or nutritional information online on the page dedicated to the powder.  Suspect.   Today I returned to the store and picked up another packet, noticing this time the other promising claims: 1000mg organic maca root powder, 15 g protein, 5g fiber, omega 3 EFAs from flax & chia seeds.  But what I read in fine print on the reverse side (the side they neglected to list online) has me livid.

There’s a few things that have me fuming here.  The lack of USDA Organic and non-gmo stamp is foremost… because out of all the manufacturers out there, I feel we should be able to assume that Whole Foods Brand is ALWAYS organic.  I am also pretty taken aback that they include soy in their products.  Soy is another biggie I avoid like the plague.  Why you ask? Well not only can it wreak havoc on your hormones, it has been linked to thyroid dysfunction and can hinder your digestive enzymes from working properly. (More on why soy sucks here!) Alright, and another thing… this is the only protein powder I evaluated that may contain wheat and dairy.  These reasons alone are enough to get me on a rant.  But the real red flag here is found bottom right:

CALIFORNIA PROPOSITION 65 WARNING: This product contains a chemical known to the State of California to cause cancer, birth defects or other reproductive harm.

Twinkies don’t have this warning.  Let that sink in.

There’s a bigger issue than Whole Foods here.  It’s how as American consumers we are ill-informed, often tricked and sometimes even flat out lied to for the benefit of the government and/or conglomerate manufacturers.  But I’m not looking to picket at the White House.  Simply put, for the price, I expected more from Whole Foods.   Luckily for me I can drive a few extra blocks and shop at Erewhon, but not everyone has that luxury.  I am disappointed by Whole Foods, but I’m not one to hold a grudge.  I just want the leading supermarket promoting health and wellness to live up to it’s name and not mislead consumers who spend their hard earned money under the pretense that they are doing the very best for their family.  Is that too much to ask?

Find the Best CBD Product for You

How I Stay Healthy on Flights