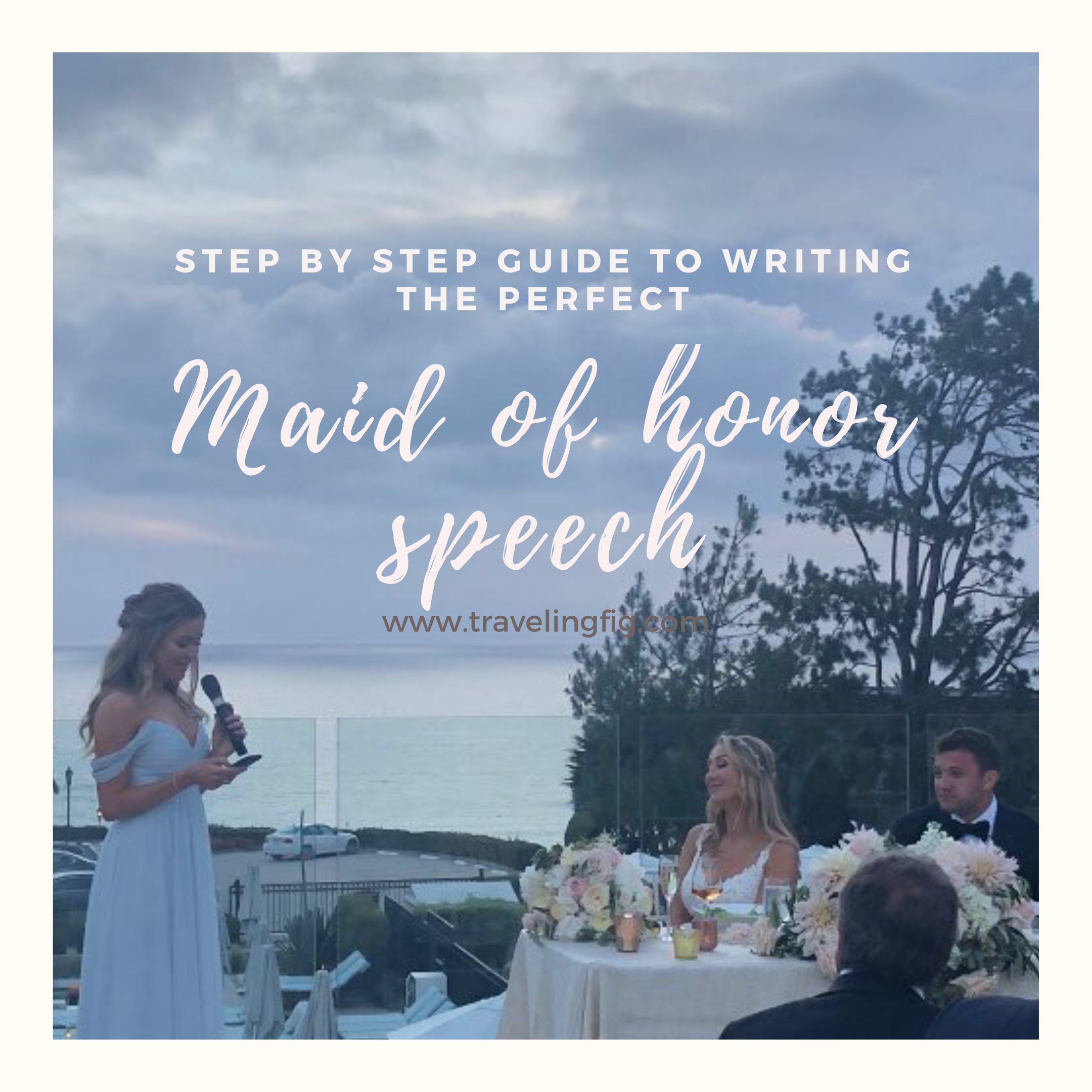 I was just the maid of honor in my best friends wedding. And while I sincerely enjoy public speaking, I still felt nervous about my speech. I wanted it to perfectly depict our friendship and their relationship. I hoped to captivate the crowd, share a few giggles, and elicit a few awws. I scoured the internet for tips, tricks and speech samples, and to my dismay, I didn’t come up with anything useful. That’s why I decided to dedicate a blog post to my process of MOH speech writing so that I might be able to help you on your speech writing journey 😉

Hi my name is Chelsea and I am the maid of honor to this breathtaking bride. Shap, you look ravishing as well.  You might be wondering why Jamie chose me for this honorable position considering she’s known me the least amount of time out of her bridal party… and the majority of her guests here. And I’m sure a lot of it had to do with the fact that I’m really crafty, but I’d like to think I was chosen to be the maid of honor, because from the moment we met, a decade ago, we have shared a unbreakable, sister-like, bond.

And like so many great hollywood stories, ours began at Les Deux.

I was visiting from Boston and pitifully out of my element.  And here was Jamie, head to toe in Bebe, with a digital camera strapped tightly around her wrist and a posse of friends, let’s call them ‘the blondes’.   TBH I was pretty intimidated, but Jamie, being her social butterfly self – immediately took me under her wing.   Within minutes of meeting, we were giggling and putting that digital camera to good use. Within days we were inseparable.

I returned back to Boston, but Jamie and I stayed in touch and decided to meet in Miami with our dear friend Katie. I thought I was just going on a girls weekend, but Jamie had other plans. She made it her mission that trip to convince me to quit my job in Boston and move to California. It was my first taste of Jamie’s secret weapon – her mastery of Jewish guilt.  And, of course, it worked.  Sometimes a sister-friend just knows whats best for you.

In California our friendship only flourished. We bonded over our mutual fear of missing out, our love of wine, and (ear muffs Burt) our infatuation with all things Christmas. And while one of Jamie’s most lovable qualities is that she is ridiculously fun, she was so much more than just a party friend (or a shopping friend) to me – and to so many others.

Jamie has always been the friend you can call for advice.  She is the queen of pep talks and one of the most thoughtful and caring friends anyone could ever ask for.   Which explains why she has more best friends than anyone I have ever met.

Let’s back up a bit.

All the while Jamie and I were bopping around Hollywood, I had known this fine gentleman, Shap.  Around the same time I first met Jamie, I had the pleasure of meeting a group of Newport beach hooligans, lets call them ‘team cud’.  I immediately loved Shap – who wouldn’t? He has the humor of Larry David, the voice of a socal surfer bro (even though he was raised in Connecticut?),  and a heart of pure gold. – but I didn’t initially put two and two together that this apparent beach dude was the right fit for my theater loving, wine snob, junior league chairman, medical sales queen, type A bestie.

It wasn’t until a month or so before my wedding, when Matt and I were out with Shap, that it clicked. I told Shap about my friend Jamie and how they would be the most perfect couple in the entire world.  Shap was game and requested that him and Jamie be sat together at my wedding.

And they did sit together!   but Jamie, freshly returned home from her stint in San Francisco, was in her socialite element.  It was like she was back at Les Deux, but minus the bebe.

I never followed up with either of them, but from their vows you know how Shap’s DM game flopped in the aftermath.  However, when Matt & I ran into Mr. Ski Bunny Shapiro in Aspen, I knew I had to try again. So I convinced Andrew to join us on a group trip to Mammoth in two weeks that Jamie was going on.

And the plot thickens.

I called Jamie immediately, and told her she was not allowed to fly to Mammoth – that she and Shap would be driving with Matt and me, no objections.  And to my surprise, Jamie started to get excited – really excited! So excited that she asked to be put in a group chat beforehand so she could start to build a rapport with Shap.  To which, I declined. I had a plan, and the plan was to facilitate the sparks flying. I mean, sometimes a sister-friend just knows whats best for you.

We weren’t even out of LA before these two were giggling in the backseat – with me chiming in every now and again, ‘wow! You guys have so much in common!’  And they DID. Turns out Shap wasn’t just some surfer bro… I don’t even think he surfs! I could talk for another 10 minutes on why they are so utterly perfect for each other, but I think today has proven that.  I have never, ever, seen Jamie so happy as she is with Andrew and Tucker. The way they look at each other, the way they bring out the best version of one another – they are true soulmates, truly meant to spend the rest of their lives together. You two are the most hard working, loyal, passionate and fun loving people I know, and you deserve all of the happiness in the world.

Take a look around guys, Andrew has been a groomsmen in 18 weddings, Jamie has been a bridesmaid in 12.  Let that sink in. That is a combined THIRTY weddings that they have intimately been a part of. If that’s not the truest testament to what kind of friends they are, I don’t know what is.

Jamie, Shap daddy, it has been an absolute honor to be a part of your special day.  Jamie, you look perfect, and Shap, you’re so lucky. to the Shapiros, cheers to your happily ever after.

Show us some star love:
Your vote is so very appreciated, thank you!
Share
how to write a moh speechmaid of honormaid of honor speechmoh speechmohspeech samplespeech writing tipswedding speech tips