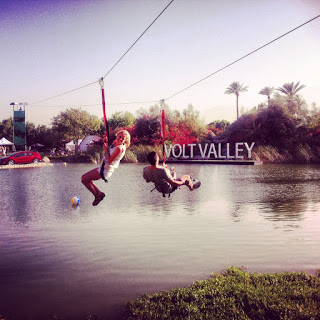 If you’re from Los Angeles and you’re planning on heading to Coachella weekend, listen up.  The concert is a small blip on your radar in comparison to the onslaught of absurdly amazing parties that are at your fingertips. I say ‘if you’re from LA’ because these aren’t your run of the mill, ‘I’m a cute girl, I’ll get in’ parties.  These are exclusive, invite only, you’ve got to be on the list, celebrity laden extravaganzas.  And they are AWESOME.

Luckily for me, I have a few friends and one spectacular roommate who weasel me onto lists, and I can honestly say that the party experience of Coachella, if attainable, should be your main priority.

Friday Night –  Wildfox and friends party.  Embodies Coachella – without the dust. You’ve still got the fashion, the celebrities, the lounging on the grass — but add free alcohol, a fire pit, makeup touch ups, and photo booth in an intimate setting. After hours had a casual 40 people over the house we were staying in.. which was walking distance to the festival. no. big. deal.

Saturday Day – Chevy Volt Valley Party put on by my dear friends at NIGHT VISION.  The party was larger than life, with a zip line, hot air balloon rides, and free flowing margaritas.  Sponsored by Patron & Bagatelle, there was everything from gourmet burgers to patron infused ice cream and Popsicle to eat.  Oh by the way.  That car was craned onto a little island in the lake for the party.  Oh and they built a bridge across the lake.  ball. er.

Saturday Night – Started off at the Guess Party (another Night Vision spectacular) where Nervo absolutely killed it in this architecturally pleasing tent venue.

Then headed to Neon Carnival (Bolthouse) for a truly adult only carnival.  There were rides, celebrities everywhere, games, free flowing alcohol, and amazing live music until 4AM.

We couldn’t stay until 4 though… because we had to get to this mansion with a dj party in an airport hanger.  Felt a little like a college rage – but in a million dollar home with a name dj.  Around 5:30 it was back to our place — with the celebrity roommates we were staying with had invited over their 50 closest friends.  This party didn’t end, the sun just came up.
Sunday day-  back to Chevy Volt Valley, because really, how can a competing party top hot air balloon rides?
Sunday night – stopped by the actual Coachella festival – to jam out to Red Hot Chili Peppers.  As I posted earlier – the experience is amazing. But it’s also freezing, windy, dusty, and you walk for miles upon miles only to elbow and push your way to not even be able to see the performer anyways. Don’t get me wrong.  If I never knew of this alternative party weekend, I would have been smitten with Coachella and had the time of my life – maybe even camped!  But mixing the parties and the concert together (with an emphasis on partying) created the perfect weekend.  Maybe if you’ve got enough stamina you could do the parties the first weekend and the festival the second, but this option is out of the question for me.  Only sleeping under 3 hours for an entire weekend is something I can handle but once a year.
Show us some star love:
Your vote is so very appreciated, thank you!
Share
coachellafashionfestivalparties

Hocatt Ozanic Detox – Worth the hype?!

Lymphatic Drainage Massage – is it worth it?